Legit or Scam? SafeMoon Facts and Due Diligence

When it comes to SafeMoon I keep seeing people ask:

When doing a search, after the usual suspects such as The SafeMoon website, CoinGecko and CoinMarketCap listing, you find people either saying “it is going to the moon” or it is a scam and a ponzi scheme.

Where is the middle ground? Where is the due diligence? Beyond the basic overview I haven’t heard many facts about the project.

So let’s see what I can find out.

The first thing I like to do is poke around on the website to get the overall concept before diving into the whitepaper.

Pretty big red flag off the jump - their website doesn’t even load half of the time. When it does it is a very simple WordPress website.

Of course, don’t judge a book by its cover, as we care more about the effort the developers spend on the project than the website.

When it does load, the website really doesn’t tell too much. Some points such as Community Owned and about the passive income, then some stats, a roadmap, and some news and logos.

There isn't much to judge yet but one thing completely lacking is who is behind this. There is no dev team or leadership listed.

So let’s head to the whitepaper!

The SafeMoon whitepaper starts with describing perceived opportunity in the current staking/farming/liquidity-pool landscape. It proceeds to tell how they are setup to address this. Most of the whitepaper is descriptive, almost narrative, rather than technical.

The only solid piece of info I get from the entire whitepaper is this:

If you don’t believe me I encourage you to read it yourself. Seriously, read the Whitepaper instead of my blog post. It is only 8 pages with 3 of the pages being only images/diagrams and all the pages except one have half the space taken up with an image. Not to mention the large and double spaced font.

I even grabbed a copy of the SafeMoon whitepaper and hosted on my site since you can't access it on theirs when the site goes down.

Some of the other text mostly sets the scene and talks about how the coin is designed to make money for the holders and prevent dips when a whale sells:

To me, this seems strange to be a focus for creating the coin.

One page discusses burning tokens and has a large graph to show the correlation between supply and price: of course with the price going up as the supply goes down.

This is a basic principle of Supply and Demand but it is only one aspect. This assumes demand. If there is no demand then the price will not rise. If no one wants something then it doesn’t matter how many of it there are.

With this coin not providing utility there is a big question of will there be any demand.

Two key aspects I see missing from this paper:

There is still no hint to who is behind this project. No names listed - leadership, dev team, companies - none.

No mention of what kind of token or the tech behind any of it. The terms Blockchain or smart contracts aren’t used at all in the entire document. Neither is security.

The next thing I like to do is check out the team. Even though it doesn’t always tell me much I’ll check some of the people out on LinkedIn as a starting point.

The first employee result I clicked on when searching on LinkedIn was Henry Wyatt who is listed as the director of software development. His experience lists a 4 month engineering internship and then the CEO of a video game company for 4 years. Searching the name of the video game company yields no related results (except his linked in profile).

Another employee looks to be the Project Lead Developer as well as holding two other positions concurrently. The couple other employees look to be full time employees at the same indie game studio which the website simply states “ALPHA LAUNCH INCOMING”.

So there are only 4 employees according to LInked In and it is unclear if this is their primary project.

Also I thought it strange the company's linkedin profile shows a different website, safemoon.net, that is only a gif - assuming it is an "under construction" gif.

Now I just want to say I’m not intending to “come at them” with this. I myself am a web developer and indie game developer and I have plenty of things I started but never finished or never seem to update the website promptly. Therefore I’m not implying they don’t know what they are doing or all this isn’t forthcoming.

Though in this situation we aren’t checking out a game or a personal project. We are considering “investing” money. Thus proper due diligence requires stricter scrutiny. I'd like to see a track record of success - some finished products - not blank websites.

Next thing I like to do is check out the community. Part of it is about the community itself, but the other part is to see what the project is up to - new development, new partnerships, etc - and the community is a really good place to get the news and find links.

I checked out their socials but reddit is the main spot to find community involvement. Discord too but I decided Reddit was enough this time.

One good sign is the SafeMoon team seems to have established a consistent schedule for AMA. So to the community the developers do not feel anonymous at all.

On the anonymous note - one AMA it was stated that some developers had already received death threats. Therefore some wish to remain anonymous. That is a valid enough reason for me to stay anonymous.

Let me also call out explicitly:

This is absolutely uncalled for and disgusting behavior.

It reminds me of threats against video game developers when players don't like the game. Simply sickening.

It's also sad that has to be said. Back to the analysis though.

There were a few questions I had rolling around in my head that were asked in one AMA. The quotes below are from the “notes” by one community member. I assume it was a video or audio AMA.

Seems like the dev team is pretty chill and has a “lets just get something started and we will figure it out as we go” attitude.

From this I get the feeling that it is less likely a scam but more likely a less thought-through plan. It seems like they don’t have a lot of answers to some obvious questions which is a definite red flag for anyone looking to invest long term.

Of course on Reddit you also had plenty of memes and shitposts. Past the AMAs I didn't find much of value.

There was one post claiming SafeMoon could “end world hunger” which was highly upvoted and commentors agreed.

There was one post showing a breakdown to show how SafeMoon could “increase 1% every day into infinity” which was also highly upvoted.

It seemed the community was built all on hype. Not much value to be found.

In fact, I found one article from a German website (BTC Echo) shared in the community that said just that:

How did the community respond to this article?

The community has been commenting:

Plus people have requested upvotes so everyone can see.

Not sure if people aren't reading the article - it is in German but Google translated it for me easy enough - or if they are glossing over that part.

Seems to be total hype.

The community is filled with investors that want to hype it up out of self-interest, as they probably have all bought in already. The fundamental of “bag holding” is not everyone can be a winner, so beware.

The devs/founders may have good intentions in attempting to make a coin that benefits people that hold the coin. Basically, making the investors money as any company would do.

But do you make a company just to make investors money? The company has to do something.

As far as I can see the coin has no utility.

I would not claim this is a Ponzi Scheme but I do see the same upside and downfall:

So as we said before, unless there are new developments that bring utility, the value will only last as long as the hype.

Now I’m not saying it won’t go up in value or you can’t make money off of this coin. I mean, as I’m writing this article the coin went up 74% in the last 24 hours and I wouldn’t be surprised if it 100x if they keep burning tokens like they say. But that is nothing new in crypto and assuming it will happen is not an investment but a gamble.

Therefore I'd say stay away if you are looking long term. There are plenty of other cryptos worth investing your money in. Unless you want to gamble on the hype continuing - can you say Doge - or the developers making an huge update that provides utility. But you could say this about any coin.

I don't doubt that you will collect your share of the 5% on transactions. But that 5% is in SafeMoon coin so if the value drops you are still losing money on the investment.

I’ve also seen a discrepancy on where people say the 5% goes. Some say it is burned. Some say it goes to a liquidity pool. Another time it says it goes to “a wallet that can never be used.”

A wallet that “can never be used” mixed with a team that is semi-anonymous and hasn't stated a plan for that wallet. . .

Where do you think that 5% of all transactions will end up?

To The Devs and Community

As I figure this could eventually get back to the devs and community . . .

To the Devs: I wish you well. I started this piece simply as due dilligence but I'm sure it came across very negative. As a fellow dev I also enjoy just starting projects and figuring them out as I go. So I hope you figure out the utility aspect with NFTs or whatever and can keep the project going. I had no intent of writing this to bash you. Just calling out any red flags I can find.

To the community: please don't death threat me. Seriously, same as above, this isn't a bashing article but I know you are all hyped up on SafeMoon ready to crush any opposition to it. After pointing out all these red flags I'm still tempted to throw $100 into it and HODL. Of course all the places I looked - website, whitepaper, community - are all going to be pro-SafeMoon; they are optimisitc sources. When doing due dilligence you have to consider the source and look for holes in the logic. I'm simply just calling out red flags here.

I don't have any ads or gain anything from traffic to my blog so I thought I'd throw my referral links at the end of my crypto blog posts. 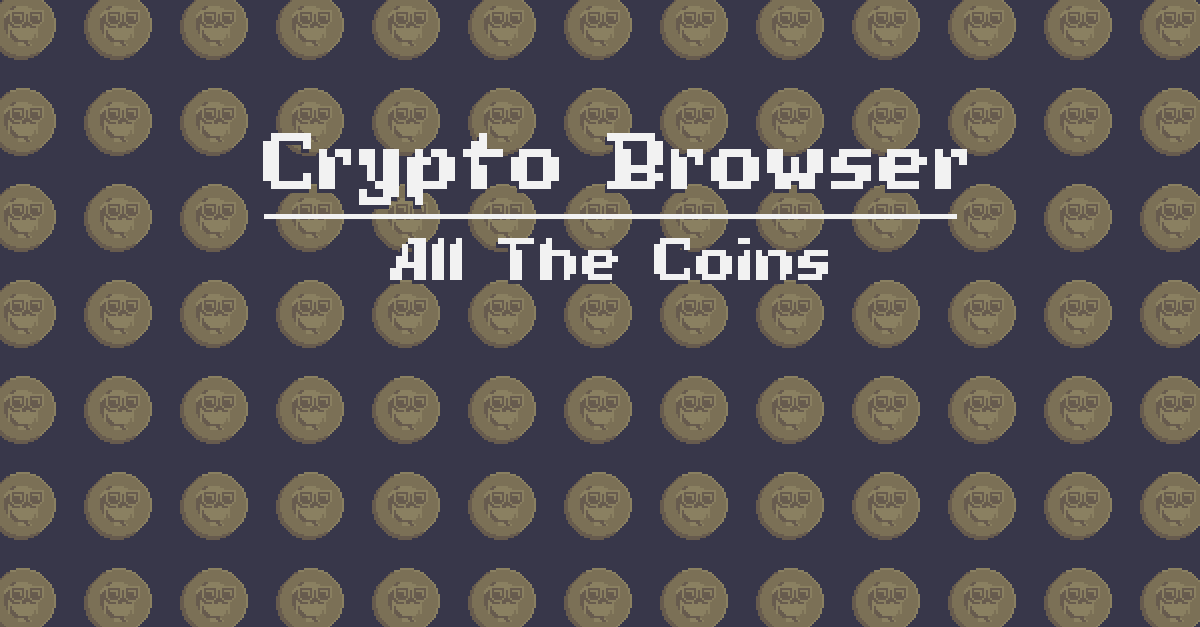 Crypto Browser: All the Coins!